The weather gods were kind and our long-awaited bus trip set off with almost forty participants, from Queen Street, Boorowa, at seven thirty sharp. The day was perfect and recent rainfall dictated that the coach was not to leave the road for fear of getting bogged.

Our leaders were Linda Cavanagh, Boorowa Community Landcare Group and South-East NSW Regional Landcare Coordinator, who is a genius at getting groups to come together on land issues; newly appointed Boorowa Community Landcare Project Officer, Amber Kelly from Rugby; and Scott Hickman from Canowindra who has a mentoring role with the Boorowa Grazing Group and long experience as the Project Officer of the Mid Lachlan Landcare Group Project, Growing the Grazing Revolution.

As we left Boorowa, we all took turns to introduce ourselves, give a brief description of our interests in land management; and to say what book or books we were reading or had read that we liked. Several books were mentioned a number of times, Call of the Reed Warbler, Dr Charles Massy; A Sand County Almanac, Aldo Leopold; Dirt to Soil, Gabe Brown; For the Love of Soil, Nicole Masters; The One Straw Revolution, Masanobu Fukuoka.

We had three farm visits, and the overriding sentiment expressed by the group was our admiration for the passion these farmers had for being worthy partners in their relationship to the land. Increasing biodiversity, soil organic carbon, soil health and tree cover were consistently mentioned.

We all felt lifted-up by the philosophy of these families who were taking a small step back from their roles to allow the next generation to ‘get their hands in the dirt’ and transition to a greater share of the management. The respect shown by these young farmers towards their parents and parents-in-law was moving. Someone mentioned the gracious way his father had shown his willingness to engage in the process of succession.

First stop was at Tumbleton, near Wombat where five generations had been farming and grazing the deep red Parna, or wind-blown soils that came in when a very arid time prevailed in a past geological age. These soils are found on the tops of the hills at Tumbleton.

We walked a few hundred metres into a paddock that had never been ploughed, very unusual on a farm with mostly arable land in the south-west slopes. 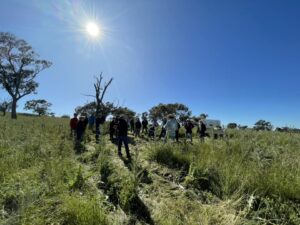 Moving down the slopes the soils are granite derived. The land was attractive and undulating with a scattering of remnant eucalypts. There was quite a bit of discussion about the importance of looking out for volunteer seedling eucalypts and trying to protect them from grazing. Unplanned grazing where stock are left in one place for extended periods tends to lead to the death of these infrequent seedlings. The longer recoveries associated with planned recovery grazing can be the trigger for the appearance of volunteers.

The next generation on this farm are moving in the direction of embracing the philosophy of life friendly farming driven by a decision-making framework that balances the needs of people, business and landscape. The Wilkinson family and their daughter Gemma and her husband Jake Chandler, together with their baby daughter Vivian are taking a long view of the future landscape that will go on increasing in biodiversity whilst providing a haven for their family, and providing a low risk, profitable business.

A common observation of the two grazing farms we visited was that despite having never been ploughed the species mix was dominated by exotic annual plants. Quite a number of native perennials were also evident. Species such as wallaby grass, weeping grass, common wheat grass, rarely Kangaroo grass, corkscrew species, tall stipa and red grass indicate that despite the annuals holding sway, changing management may swing the balance more towards the natives that evolved here. These species don’t require any inputs, just slightly changed management.

A change of focus came with our second stop at Hall Family Orchards. We had an introduction to the detailed management needed to produce high quality fruit with the challenges of soil nutrient issues and the complexity of moving to a more sympathetic land use philosophy.

We were bowled over with the detailed knowledge that Chris and his family need to achieve their goal of improving land and diversity in an intensive cherry growing farm business.

Chris has been awarded for his achievements in carbon sequestration, with a Carbon Cocky Award followed by being named NSW Farmer of the year for 2019. These awards have given recognition to Chris and his family’s innovation and persistence in showing that orcharding can be run using regenerative principles.

The venue for lunch was The Grove Estate Winery owned by the Mullaney family.

The Fowler family’s’ Rosedale was our final stop and the theme of wise stewardship on a farm that has been in the family since the late 1860s. Tony Fowler gave us a wonderful history of the farm and the changes that have happened over their tenure. From horse to tractors and all the digital technology of the modern age. The family has moved into the philosophy of managing for people, business and landscape. The importance of family was a strong theme all day and training in managing using holistic principles rated as very important. Here are families who have moved away from the circular discussions that so often characterise our fumbling attempts to address this necessary facet of farm businesses. They have acted and a plan is unfolding where Tim Fowler and his wife Clemency are taking the first steps in a journey to making true profits. That is, low-cost farming using mostly contemporary energy, low risk, low-cost businesses that rely on the landscape’s capacity for renewal, and farm ecosystems with increasing biodiversity and improving levels of soil organic carbon. Tim was full of praise for those who came before him and is facing the future with eager anticipation and eyes wide open.

We walked into another large and never-ploughed paddock with huge remnant trees and abundant pasture in this good season. It will be fascinating to observe the changes as these farmers learn with the experience of years just what makes the landscape tick.

We moved to the tranquil garden at Rosedale where Tony and Marie Louise have lived for many years. It is now occupied by their daughter and son in law. Stephanie and Mike run the Bulla Creek Brewery and we spent a pleasant hour yarning and tasting the various beers.

A wonderful day and so good to be out and about after the dramas of the last three years.