It’s not easy for the average person to prioritise seeds, and yet they are the beginning of all life.

From the size of a pinprick to weighing down a human hand they are genesis.

For Landcare groups across NSW, seed propagation and collection is a crucial step in the regeneration process. Keeping an eye on invasive species a close second.

In the Central West, Dunedoo-Coolah Local Landcare Coordinator Fiona Luckhurst, along with passionate volunteers have been quietly gathering and collecting seeds to ensure the future of local biodiversity.

“We originally began this project with an aim to connect our community members in a multi-generational way through non-hybrid food crop seeds, but it has grown into so much more,” Fiona says.

“We want to ensure that local biodiversity thrives in spite of the many challenges it faces.”

In a region with woodland and grassland as primary habitats, old gums and native grasses are often seen swaying together in a ‘good’ year. But changing climate and land management have stressed local landscapes.

“The drought and bushfires were a catalyst for collecting native seeds as we wanted to preserve and increase availability of local native species for revegetation projects and plantings in local gardens and parks.

“We got funding through various channels, including the Landcare NSW Natural Disaster Seed Fund, to support our project. We’ve had so many challenges in response to the drought and fires. One of our biggest concerns over the past two years has been the extensive die-back of native trees and plants. Many have come back abundantly in many places, but many have not. Over-grazing and native vegetation clearing have had a big impact on local biodiversity, so our work is crucial in ensuring that our remaining vegetation is genetically diverse and has long-term viability.

“We are just starting out, but we have a focus on plants for habitat for endangered fauna species such as Grassy Box Woodland species including Mugga Iron Bark, Yellow, Grey and White box, native grasses and Casuarinas for the Glossy Black Cockatoo,” Fiona said.

For Milton Rural Landcare in the South East, the long-term effects of the devastating fire that tore through the South Coast will scar their landscape for many years to come.

Containing patches of low-land subtropical rainforest, the region is characterised by lower rainfall as opposed to the damp and high rainfall features of tropical rainforest. Stranglers, plank buttresses, large epiphytes and woody vines are characteristic features with its most southern limit in the Clyde Valley (west of Batemans Bay), many of which were fire affected.

Milton Rural Landcare Secretary Sybille Davidson, says it is home to many flora species not found elsewhere in the south-east of Australia and over the past three years has been painstakingly collecting and propagating seeds to replant remnant rainforest across the region.

“The origin of our involvement in this project was instigated by our local, and very enthusiastic, amateur Rainforest expert Dave Bland.

“Dave is a small farmer however years of pursuing his interest in the Milton region’s special local rainforest species and seed propagation, spending his childhood and early years exploring these environments, led to him putting in considerable effort to raising awareness about the special significance of these remnant patches and his concern about the depleting biodiversity, including of local fauna,” Sybille says.

Part of the Saving Our Species program, the project engaged Milton Rural Landcare to grow 14,000 tubestock over 3 years to help restore and support local biodiversity and educate local landholders on the importance of the rainforest.

Similar to Dunedoo Coolah Saving Our Seeds project, working with local landholders has been crucial component as much of the Milton Ulladulla Subtropical Rainforest TEC is on private land Sybille says.

“The project has worked with a variety of stakeholders and focuses on improving the resilience of remnant patches of Milton Ulladulla Subtropical Rainforest TEC through excluding stock, managing weeds, improving occupancy and community education.

However, challenges of the past 18 months have taken its toll on local ecology.

“Of the main remnant patch at YatteYattah Reserve – one of our important sites -, a major gorge with its significant huge fig tree was burnt out.  The properties of three of the participating landholders that took part in the program were significantly burned. One was completely burned. It’s devastating to see years of work, and hundreds of years of growth, gone in minutes.”

“This affects all levels of the local ecology who were already stressed by drought and vegetation clearing. There are many species of birds solely reliant on the specific fruit and berries made by local trees. Birds such as pigeons, doves, thrush, lyrebirds, bowerbirds, green catbirds; various honey eaters, and even a few predator birds such as Sooty Owls and Powerful Owls, are all reliant on the rainforest and the food it produces.

“The effects of the fire and the diminishing extent of habitat and feeding trees will limit the range and constrain their successful breeding into the future meaning populations of these species will continue to decline. 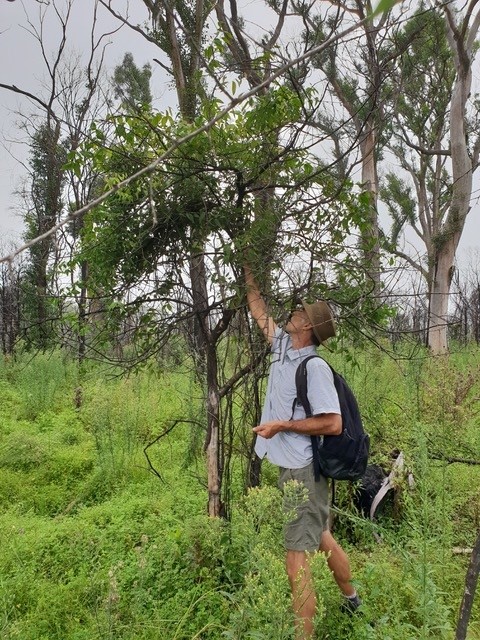 However, the dedication by local volunteers in ensuring the rainforest, and the species which rely on its health, is not to be dismissed. Volunteers have continued to work in seed propagation to help restore local biodiversity in the wake of the fires.

An ongoing and delicate process, due to the fires determining each species readiness to be harvested can often only be seen in the crowns of the tress, however some lower growing species are recovering and even have begun to produce fruit which has been essential for local wildlife recovery, Sybille says.

“It has been wonderful to see species recover and shows the resilience of the Australian landscape, but in heavily burned areas even many of our mature Eucalypts are struggling to recover.

“There is a range of species that have gone missing and may take decades to reappear and achieve a crown able to produce fruit – which leads to natural reproduction – which is devastating.  There are small signs of regrowth from lignotubers (a lignotuber is a woody swelling of the root crown possessed by some plants as a protection against destruction of the plant stem, such as by fire) but only at the base of the burnt stems.

Both Fiona and Sybille agree that education and participation of public and private landholders is key in ensuring the future of local environments balancing on the brink of future viability.

“The big challenge we are working against is general ignorance on the importance and value of biodiversity in the general public and government”, Fiona says.

“We’ve got challenges to overcome, and we need to work to educate ourselves to ensure that our actions aren’t going to adversely affect our environment even further. People are feeling scared after the fires and the challenge will be balancing the idea to ‘clean up’ areas of scrub, fallen timber and other habitat versus the need to understand that much of this is needed for local species to thrive and survive.

“An ageing population and the decline of the family farm is contributing to clearing and the spread of invasive species which is hurting local biodiversity. In the end if you are not emotionally invested, your investment is going to be made on economics and not conserving the environment for future generations and valuing the amenity of the environment. This is where education comes in. We’ve got to learn from one another to grow for the better.”

Sybille echoes the sentiment, saying the greatest challenge now lies in opportunistic clearing of fire-affected remnants that may and will come back, causing further fragmentation of the surviving species and future degradation of the local landscape.

“It’s a difficult process and terrible to see so much of our work destroyed but working together and focusing as much on the long term as the short term is how we restored and supported the forest last time and we will do this again.

“We have lost a lot. Three of the major property owners included in the project had either significant losses or complete loss of their revegetation corridors, including the high-cost tree guards and the timber stakes. One lost his house. His rainforest patch burned right down to the creek bed.

“But we will work together as a community to rebuild. We also have the support of bordering Landcare groups who have shared some seed from their reserves so we can regrow.

Like Fiona, Sybille remains cautiously optimistic about the future and their work restoring the environment through collaboration and planning.

“We hope to extend and re-establish the vegetation corridors between the remnant isolated patches of rainforest across the Milton-YatteYattah farm properties, but also enhance the populations of certain particular rainforest species within and adjacent to those vegetation corridors.  This will in turn lead to expanding the habitats of forest creatures, and hopefully their populations of native wildlife. So long as we have relationships between landholders, project partners and community groups our project and work will continue to provide a valuable base into the future.”

The Local Landcare Coordinator position is part of the NSW Landcare Program. A co-managed project between Landcare NSW and Local Land Services NSW and supported by the NSW Government.