The planting of a ceremonial tree has marked the completion of the NSW Government’s ambitious plan to get one million trees in the ground by the end of the year.

Minister for Planning and Minister for Homes Anthony Roberts planted the millionth tree in Camden, alongside Camden Mayor Therese Fedeli, during a community planting day at Elizabeth Macarthur Reserve on Saturday 5 November, 2022.

“This is the culmination of more than three years of hard work to meet the government’s priority to plant one million new trees by 2022 across Greater Sydney, with countless people taking up the one million tree challenge alongside us,” Mr Roberts said.

“To meet the goal almost two months early is a testament to the mammoth planting efforts of the community, local government, and organisations like Landcare NSW, and Greening Australia, who got on with the job despite weather and pandemic challenges.”

More than 200,000 of the one million trees were planted and registered by the community. Many of those came from the Government’s Tree Giveaway, which saw over 77,000 trees given away to green-thumbed Greater Sydney residents.

The one millionth planting marks the completion of the Greening our City Premier’s Priority, the second priority to be met in recent months following the successful increase of the proportion of homes in urban areas within 10 minutes’ walk of quality open and public space by 10 per cent.

“Together we have created – and continue to create – greener, safer and cooler urban environments with world-class green spaces for everyone to enjoy.”

“Now our focus turns to our long-term target of increasing tree canopy and green cover in Greater Sydney to 40 per cent by 2036.” 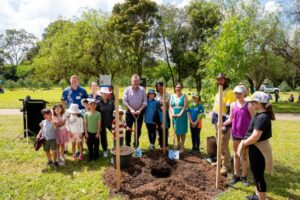