In his opening speech to 250 participants at the biennial Landcare Muster in Albury (25 October), Landcare NSW Chair Rob Dulhunty praised the founders for their vision and determination and acknowledged Landcare NSW’s 10 year anniversary.

A number of the founders of Landcare NSW were present at the Muster and they took time out of the busy program to reflect on the early days of the organisation and what had been achieved (see photos).

Through their hard work, persistence and dedication – and that of the many who followed in their footsteps – Landcare is growing in credibility, profile and effectiveness in NSW.  While Landcare is based on localism the movement is unified and networked via the existence of Landcare NSW as a state peak body.

The idea for a state organisation was born in June 2007 when volunteers met in the town of Myuna Bay on the shores of Lake Macquarie.  Their mission, during a time of declining Landcare support, was to determine how to get the NSW Government to listen to grassroots Landcare.

In October 2007, the inaugural Landcare Muster was held in Tamworth.  The headline on the flier for that event read: Landcare Finds Its Voice!  The photos of the occasion show enthusiastic agreement to form a peak body.

Addressing the 2017 Muster, Rob Dulhunty noted, “Some of those volunteers are here today – still fighting the good fight.  People like John Hughson, who played a catalytic role in rallying grassroots Landcarers, and Chris Scott, who was quoted in the original press release saying:

The formation of a statewide representative body for Landcare will do much to ensure the contribution of Landcarers across NSW is properly valued.

“Ten years later we’re still here thanks to our founders and many, many others who have played a role. Our Constitution defines our purpose as:

To represent, promote and advocate on behalf of community-based Landcare and community driven sustainable natural resource management in NSW.

“We’ve been fulfilling that purpose since our formation – under the inaugural chair of David Walker, who is also here today, followed by Mandi Stevenson, and during my tenure since 2012.  I’d like to thank Mandi and David, and everyone who has been part of this journey.

“Our Executive Committee and our Councillors are all volunteers and I am extremely proud to be in their company,” said Mr Dulhunty. 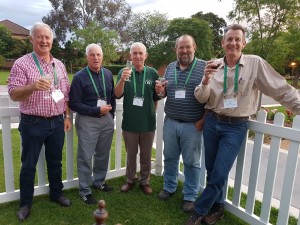