The Mulga lands bio region are often characterised by a hot, persistently dry, semi-arid climate but the landscape on ‘Naree Station’ currently sits more under a moisture-based landscape with the rains that have spread across the state turning the station to a wildlife haven for birds and aquatic creatures.

Red dirt, now mud, defines the woodlands that are spread across the property spanning 14,400ha. Local landowners walk through the station learning about the history of the land and the conservation efforts made by Bush Heritage Australia, with the support of the NSW Biodiversity Conservation Trust, and the apparent changes the conservation actions have wrought for the landscape.

The regeneration of the mulga, often hindered by wild goats, is now flourishing due to the destocking of the property with a focus on conservation efforts in a landscape often misunderstood and sensitive to overgrazing and the effects of climate change.

Western Landcare Executive Officer, Louise Turner, said the field day at Naree was an opportunity for local landowners to grow in understanding of Bush Heritage Australia’s role in the local community and their conservation efforts, as well as hear from local landowners who border the property to see how their systems, which have stock, can align with conservation objectives. 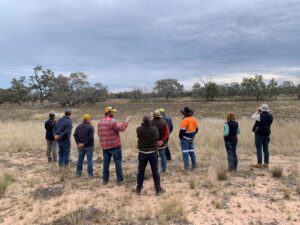 “‘Naree’ was chosen due to being in one of the four priority bioregions in the Western region and their heavy involvement in conservation activities. Almost all surrounding landholders are pastoralists, so it was important to show the link between biodiversity conservation and the importance of it in relation to farming systems.

“Landcare, and the Western region Partnering In Private Land Conservation Project ‘Learning from Biodiversity Conservation in the Rangelands’ project, wanted to champion what local landholders are doing in the area and to share with neighbours different ideas around what biodiversity conservation looks like. There’s many different types of actions that land holders can do that can improve biodiversity, the value of their land, and the health of their environment.

In the meantime, with recent rains, wetlands flourish as rivers spill into floodplains highlighting the fingers of waterways that spread across the landscape. Birdsong and the croaking of frogs has taken over as the sounds of the day as the conservation strategies, from feral animal control to destocking, have helped this sensitive ecosystem thrive highlighting how working with the landscape can help it thrive.

This event is part of the Partnering In Private Land Conservation Project. Landcare NSW is working in partnership with the NSW Biodiversity Conservation Trust (BCT) to raise awareness and support for private land conservation efforts across the state.