Around sixty people attended the Far West Rangeland Rehydration Alliance (FWRAA) field day hosted by Western Landcare NSW held on 6th- 7th July, 2022. Having flown in to Broken Hill we drove 290 kms to White Cliffs via Wilcannia. The most remarkable feature being the extent of groundcover and the Kaleidoscope of colours that hid the deep red soils of outback NSW.

That night the hospitality of country life was on show with a banquet in the creek for around seventy people at Faulkenhagen.  We were spoilt for choice with a smorgasbord of food and beverage topped off with a homemade Quandong desert. Guests mingled around two open fires, colleagues caught up on the local gossip and out of towners got to mingle with new found friends.

The following morning, we met at the White Cliffs hotel for a bacon and egg roll breakfast followed by a short trip out to a pastoral property northwest of White Cliffs – Caradoc Station. There the property owner showed us work he had undertaken to remediate erosion through “gullyheads” and how his ponding structures were designed to spread water across the landscape ahead of the gully or point of erosion. 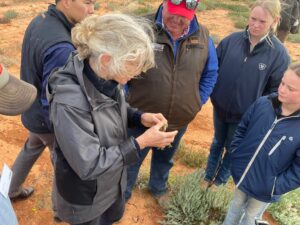 These earthen ponds proved effective not only in redistributing water, but they served as valuable organic beds that allowed native species to germinate and thrive on the watery side.

A convoy of 4WD’s then headed back to White Cliffs community hall for a mid-morning registration before a series of speakers presented on a diverse range of topics including the technicalities of rehydration; pastoral grazing in the far west; seed and nursey development areas; plus a selection of government and commercial representatives advising on various topics. As the afternoon sun was lowering in the west and the wind had gathered pace, we headed off to see some further work that was “ripping rewards”.

A one-hectare research site which had previously held bare ground for three decades was rich in floristic diversity. With such a good season the benefits in ripping and stock exclusion fencing allowed annual and perennial grasses, herbs and forbs to prosper. This then provides habitat for natures creatures, captures water in the landscape and mitigates the erosive effects of wind.

Just a short distance away we observed the construction of a mesh roll filled with rocks in a dry creek bed. The roll is designed to slow the rush of water and ameliorate its power as it moves down the creek bed.

The idea being in times of flood, organic matter gets caught up in the mesh roll further reducing the speed of water and thereby leaving behind the perfect organic bed for seeds to germinate post flooding.

Thank you to Landcare Western Division and Rangelands Rehydration Alliance for hosting the event.