In September 2022, six Cane Toads were initially found and reported by a rural landholder in Mandalong area in the Hunter Region. The toads were found at the premises around the farm dwelling and surrounding sheds, and it is unclear as to origin of the animals to the site. To date a total of forty animals have been removed and humanely euthanised.

Despite Cane Toads being widespread in Queensland and areas of north-eastern NSW, Cane toads are considered a serious non-native invasive pest in NSW. A Cane Toad Biosecurity Zone exists in all areas of NSW except a portion of the north-east of the state.

The management of existing non-native invasive animal populations and preventing the introduction and establishment of new non-native animal species are key concerns for the NSW Department of Primary Industries (NSW DPI).

Cane toads have the ability to cause devastating impacts on our communities, native wildlife and ecosystems due to their ability to spread to new areas, use limited natural resources and to poison animals that try to eat them.

Cane toads can be accidentally transported to new locations via freight, including nursery products such as mulch and plants, and with travellers in camping and caravan equipment.

NSW DPI would appreciate the assistance of members of the Landcare network and community, including local industry such as nurseries and primary producers, that purchase plants, stockfeed and other materials from Cane Toad-infested areas (such as Qld and northern NSW), to be vigilant when receiving incoming deliveries by checking pallets, plants and containers that may accidently host a Cane Toad. 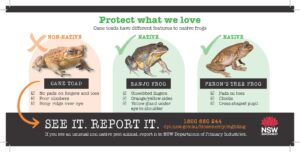 Be alert for Cane Toads, as they are particularly active over the summer months at night.

Landcare can assist NSW DPI by sharing information through their networks and raising the awareness of their members. It will be devasting for the remaining areas of NSW to become infested with Cane Toads due to their impacts to the environment, community and industry.

Opportunities may exist for Landcare members to become involved in dissemination of cane toad information to the community and on ground works as they arise. Reach out to NSW DPI through the invasive.species@dpi.nsw.gov.au mailbox or contact your Local Landcare Coordinator.

For more information regarding the Cane Toad Biosecurity Zone, refer to the NSW DPI website. Further information about other non-native animals of interest is also available at this website.

QR code with link to the NSW DPI website